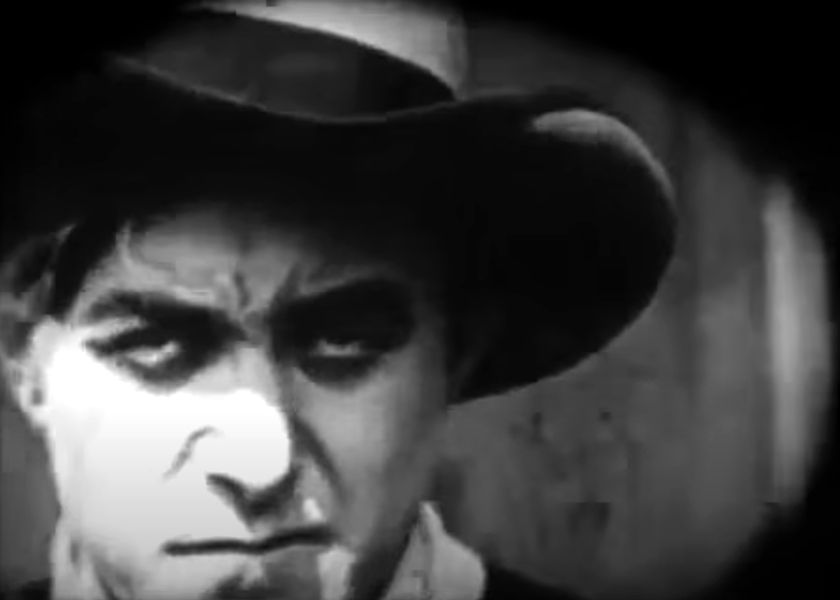 The cattlemen, led by Thunder Flint, reject the right of small farmers to plow the land where cattle could graze. Farmer Sweetwater Sims defends his rights. Sims, his daugher Joan (Malone), and son Ted live happily in their small cabin. Flint orders his men to build a fence around Sims’ pond.

In their home Sims and his children are having dinner when Sam Turner (Gibson), an employee of Flint’s, visits. Sam, who is courting Joan, brings a letter from Flint about the water dispute.

Elsewhere, an officer hangs a reward poster for the capture of Cheyenne Harry. As the official leaves, Harry (Carey) pops out of the tree and laughs at the poster. Harry rides to the village of Smithfield.

In Smithfield, Harry drinks in the local ginmill. Placer Fremont (Pegg), a rancher, drinks with Harry. Soon, both are staggeringly drunk. Sam and Ted visit the bar and get in a fight with Harry and Placer. Pursued by the drunks, Sam and Ted exit through an upstairs window.

The sheriff has been watching Harry and tries to arrest him, but Flint arrives and vouches for Harry. Flint wants Harry to get Sims off the farm.

Ted goes for water and crosses Flint’s fence. Placer, wanting the money Flint is offering for removing Sims, shoots and kills Ted. Sims and Molly find Ted dead in the pool. When Harry arrives looking for Sims, he finds Sims, Joan, and Sam mourning at Ted’s grave. Harry approaches and expresses his condolences. Harry says he would not plug anyone in the back. He takes Sims, collapsed in grief, home. Harry tells Joan that he now sees what the cattlemen really are. He thanks her for opening his eyes.

Back at the bar, Harry tells a rancher that he is reforming, quitting Flint, and quitting killing. He decides not to drink. The rancher informs Flint that Harry is quitting. Flint orders Placer to bump off Harry. The cattlemen are visiting the farmers that night, and he wants Harry out of the way.

Sam overhears Flint planning the raid and rides to Sims’ house to warn them. He goes to Harry and tells him about the coming raid and about Fremont looking for him. Harry tells Sam to warn the farmers.

In the streets of the town, Harry and Fremont face off with rifles in hand. The townspeople retreat to safety as Harry and Fremont walk toward each other. At the last moment, Fremont lunges around the corner of a building. Harry approaches warily and sticks his hat around the corner. Fremont shoots at it, and Harry leaps out and kills him. As the towns’ people approach the dead man, Harry rides out of town.

Sam warns Sims and prepares to fight. Joan rides for help from the other farmers who gather at Sims’ house. She meets Harry. He tells her to return home. He will get his outlaw friend, Black-eye Pete, and his gang to help the farmers. The cattlemen have surrounded the farm house and the fighting is fierce. The situation is desperate. The farmers are nearly out of bullers, and Sam has been shot. Harry and Pete’s gang arrive just in time. They drive off the attackers.

Harry and Pete return to the cabin. Sims expresses his gratitude for their help. Harry examines Sam and tells him that he will soon recover. Harry thanks Pete and says his goodbyes. He is going straight. As he makes this declaration, he exchanges sideways glances with Joan.

Peace and tranquility have returned. Sims asks Harry to remain with them and be his son. Joan, standing behind her father, looks hopefully toward Harry. However, Harry, thinking about his outlaw past, says that he belongs on the range. Sims presses him, and Harry agrees to think it over. Sam hopes that Joan wants him, but gracefully accepts her preference for Harry.

Evening arrives, and Harry has decided to leave. Joan has decided he must stay. As he is starting to leave, she comes to him with her request. As the sun sets, he gives her the answer she desires.

After a relatively short, three year apprenticeship as stuntman, actor and general production assistant, John Ford began his distinguished directorial career with a series of westerns for Universal Pictures. From 1917 to 1921, Ford collaborated with star Harry Carey on 22 feature films, of which Straight Shooting was the first. From the beginning, Ford exhibits his artistic sensibilities. This initial feature contains elements associated with Ford’s Westerns throughout his career: strong characterizations and sweeping panoramas of the Western settings (in this film, the rolling countryside near Newhall, California).

Scenario writer George Hively used a standard Western story line, the conflict between powerful cattlemen and weaker farmers over use of their common land, as the basis of the simple plot. The plot incorporates several well-established Western themes, including: the hero, an outlaw but good at heart, changing sides, a sweet and innocent heroine who lives with her father, but whose mother is apparently dead, a gunfight in the streets of a town, the heroine riding to warn the other farmers of the coming attacks, and the good characters trapped in a besieged cabin.

Harry Carey, nearing forty, has a strong screen presence. Not flashy, his persona, as a good bad-man, is solid, quiet, reliable, and formidable if pressed. His agreeable face and distinctive mannerisms draw the eye of the viewer. His gestures, tokens of internal conflict, include: pushing his hat back and scratching his head, rubbing his chin with his thumb, or folding his arms. Ford emphasizes Carey’s facial expressions. He is shown in several close-ups; dark make-up around his eyes accentuating his stare into the camera. These stares emphasize his thoughts, especially his sorrow for past errors.

The gunfight involves a variety of small-scale movements. Both men are seen in close-up as they maneuver through the streets. Fremont walks into an extreme close-up and past the camera. Using his hat to draw a shot is a tactic that Carey included in many subsequent westerns. After killing Fremont, Harry blows into the magazine of his rifle. As he approaches his horse, he pulls its tail before mounting and riding out of town.

Intimate moments reveal personalities. In the first scenes of the Sims’ family, Malone is introduced as a happy young woman, skipping up to her father and kissing him. (Seemingly, skipping signified innocence in a young woman. D.W. Griffiths’s heroines skipped a lot, too.) Later, she mourns her brother, hugging his dinner bowl and tenderly putting it in away as a memory.

After the shooting ends, the outlaws gather in Sim’s home. In a charming little vignette, a Mexican outlaw (whose ethnicity is clear from his hat and clothes), looking around, finds a jar on a shelf, probably homemade jam, opens it, scopes out a glob with his finger, and eats it. He starts to put the jar back, changes his mind and slips it into his jacket. This scene has no relation to the story line except to add some amusement and bring out some softness in the outlaw.

The road to the Simms’ house leads through a pond. Several scenes show Harry and Sam crossing this pond. During one crossing, Sam’s horse, galloping through the water, has an accident and falls. Gibson remounts as the horse gets up. This may have been a planned event but was possibly an accident during which the camera continued filming.

Ford adds visual interest to many scenes by viewing characters through an open door. The character(s) stand at the door frame and are edged by interior dark and exterior light. Harry and Joan stand at the door as he tells her he has learned the truth about the cattlemen. Sam is standing in a doorway as Placer goes out to kill Harry. The camera is looking out Sims’ door as Sam rides up, dismounts, and runs inside to warn of the coming attack. Harry looks out the door as Black-eye Pete rides off with his gang. He and Joan exchange glances through the doorway as Harry walks out to decide if he should stay. Ford’s best known use of a doorway is the final shot The Searchers (1956). All the other characters enter the silhouetted darkness of the house, and the camera looks out the door into bright light where Ethan (John Wayne) stands alone looking in. For a few moments, he holds the elbow of his right arm with his left hand (in a gesture reminiscent of Carey) and then walks away from the family he cannot join. The views out doorways in Straight Shooting do not attain this depth of meaning.

In 1917, much of the area around Los Angeles, now covered by development, was open country. The film features panoramic views of hills and valleys, cowboys on horseback, and herds of cattle. The outlaws enter outlaw valley via a scenic passage now known as Beale’s Cut. This photogenic site was first excavated as a pass in 1854 and enlarged to a depth of ninety feet by troops under General Edward F. Beale in 1863. The location was used in numerous Westerns and was obviously a favorite of Ford who included it in several later films including Three Jumps Ahead (1923), The Iron Horse (1924), and Stagecoach (1939). King Vidor filmed a scene for The Sky Pilot (1921) at the cut.