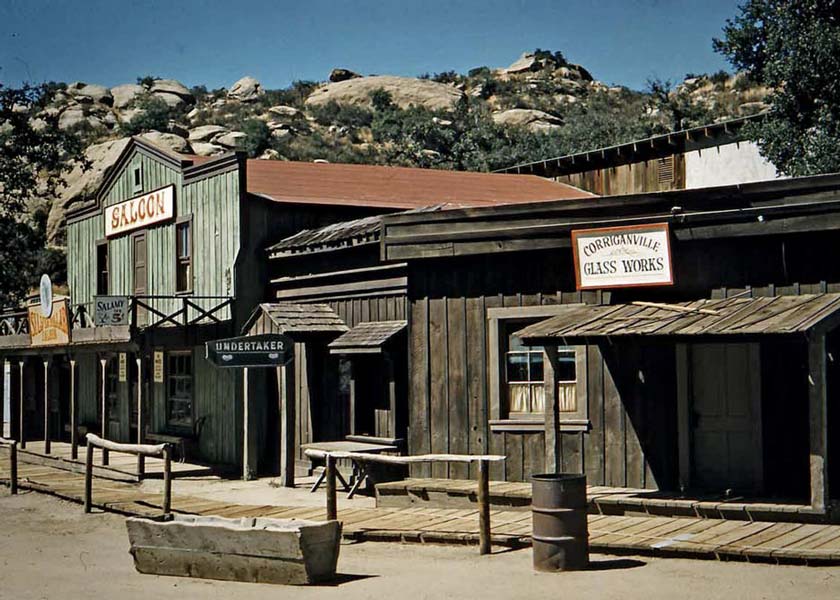 In 1937, Ray 'Crash' Corrigan, one of the stars of Republic Pictures' The Three Mesquiteers Western series, purchased a 1500 acre ranch in Simi Valley, Ventura County, California, for $11,354. The ranch included parts of the steep and rugged Santa Susana Mountains and Simi Hills at the southeastern edge of the Simi Valley. The hills were covered by thick chaparral brush, oaks and evergreen trees which grew along the Arroyo Simi in the flatter portions of the property. Picturesque sandstone rocks studded the landscape.

The variable landscape provided fine settings for filmmaking. Shortly after Corrigan purchased the ranch, filming began on the property. Over time, roads and movie sets were constructed. These facilities were used for many movies, including John Ford's Fort Apache (1948), and television series such as The Long Ranger. A replica western town called Silvertown (pictured above) was built on a flat area of 5.2 acres. The town was backed by steep hills and sandstone rock outcroppings.

In 1949, sufficient facilities had been constructed to open the ranch as an amusement park. Besides Silvertown, Corriganville included a rodeo arena, a so-called Sicilian Village, a small lake with boats, Sherwood Forest Picnic Area, and stagecoach rides. Western entertainment was provided throughout the day. Live stunts, such as gunfights and fist fights, were staged on the Western street.

Corrigan was obviously proud of his ranch and happy to please the visiting public. He greeted people at the entrance to the park and on the main street of Silvertown. He also took part in some of the stunts staged for the visitors.

Around 1955 two events occurred which affected the future of Corriganville. The first event was Corrigan's divorce, which was followed by a long period of negotiation over the community property, including Corriganville. The second event was the opening of Disneyland, a new phenomenon of great, and long-lasting, attraction for visitors. Unlike Knott's Berry Farm, another theme park in the greater Los Angeles area with some Western-themed attractions, the old-fashioned Corriganville was unable to share visitors with Disneyland. The promised large-scale development and improvement of the ranch announced in 1955 never occurred. Corrigan continued to operate the ranch, however.

In October, 1963 The Los Angeles Times reported that after eight years in the courts Corrigan and his ex-wife had agreed to sell Corriganville for $1.8 million. Corrigan was out of the amusement park and movie business. One can imagine his feeling of loss.

The end of the ranch as a park and filming location came quickly. The Simi Valley 118 Freeway (now the Ronald Reagen Freeway) was built through the ranch during the mid-1960s. Bob Hope purchased the site in 1965 and ran it as Hopeville for a year before it closed. Most of the buildings on the ranch burned in fires in 1970 and 1979. By 1976, an annual two-day motorcycle race was the only event staged at Corriganville. In 1986, a developer bought the ranch and made plans to build condominiums or an industrial park on the site of Silvertown. In 1988, however, the city of Simi Valley purchased about 200 acres including the Silvertown area for a park. The Corriganville Regional Park opened in 1998.

The Regional Park has minimal development. A park loop trail makes the main areas easily accessible by foot. The trail runs through the oak shaded forest along Arroyo Simi once known as Sherwood Forest. It crosses the bridges over the creek built for filmmaking and passes the concrete pond where underwater scenes were filmed. It goes through the site of Silvertown and near the sites of movie mines, caves, forts, and villages. The view from this trail also includes the freeway cutting through the mountains, houses where the parking lot and arena once stood, and some severely disturbed landscapes.